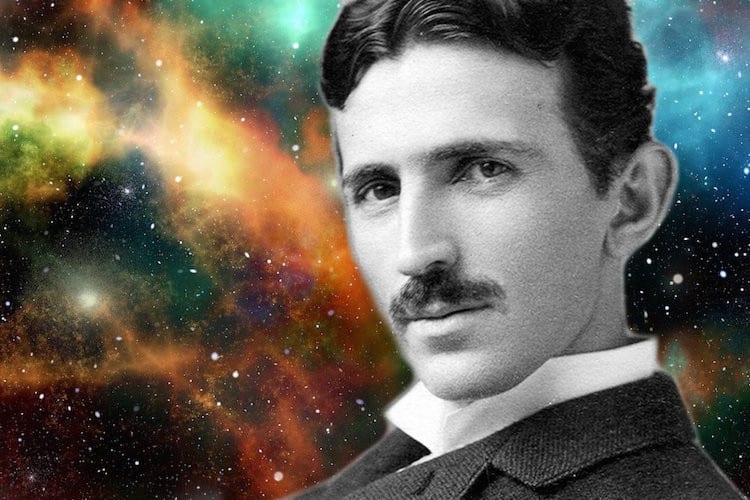 “My brain is only a receiver, in the Universe there is a core from which we obtain knowledge, strength and inspiration. I have not penetrated into the secrets of this core, but I know that it exists”. 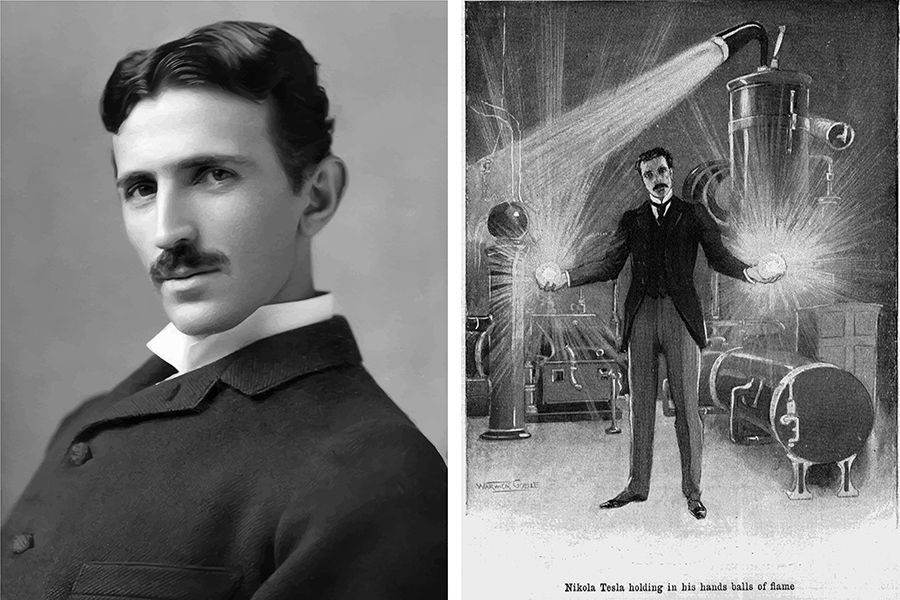 Nikola Tesla was one the most brilliant minds of the last centuries. Born in Croatia in 1856 from a family of Serbian origin, he is responsible for many inventions used in today’s society.

Some of his most prestigious accomplishments include:

I wanted to discuss three of greatest achievements: the invention of AC current, the Death Ray and his work on Free Energy.

Tesla began to work for Thomas Edison just after immigrating to the USA in 1894. Edison was promoting DC current at the time.

One day, Tesla discovered that AC electricity could travel much further distances than DC as it uses a transformer to step up voltage for long-distance transmission. It is also cheaper and more efficient considering that DC electricity would imply having massive nuclear power-plants in every city throughout the world. 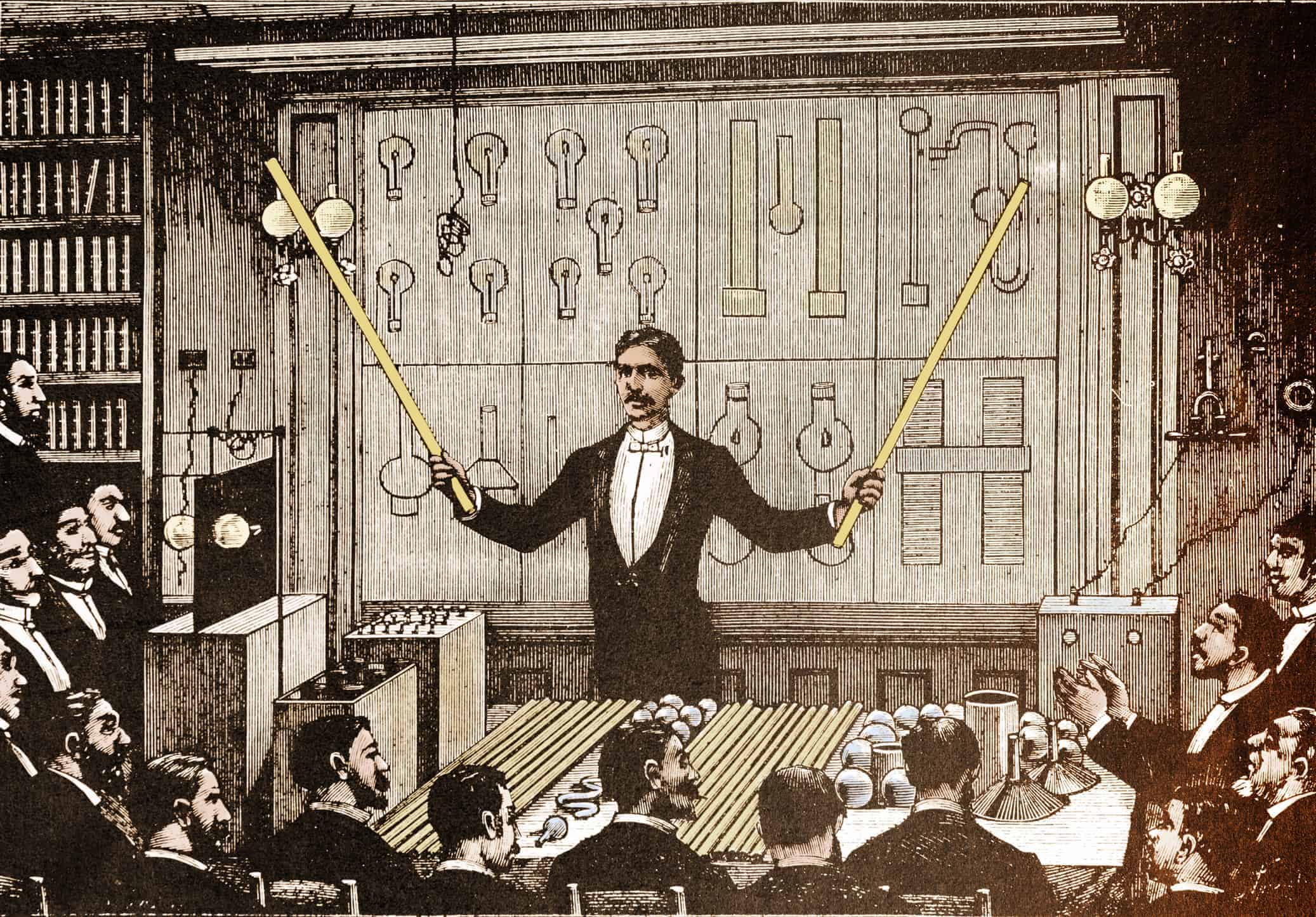 This, made Edison fear for his business and reputation. Consequently, he came up with a plan to sabotage Tesla’s invention. He would hold public demonstrations involving electrocuting animals like calves, horses and elephants, just to prove how ‘dangerous’ AC was. Edison went so far in his attempt to win the war of the current that he began giving children 25 cents for every stray dog they brought him so that he could publicly electrocute them using AC dynamos.

It is in 1893, that AC electricity was finally proven superior over the existing DC electricity. Nikola Tesla had officially won the war of the currents and we now use AC electricity every day.

One of Nikola Tesla’s greatest and most dangerous inventions was called the death ray also known as “Teleforce”.

Teleforce is a defensive weapon that Tesla described as being a “nozzle that would send concentrated beams of particles through the free air, of such tremendous energy that they will bring down a fleet of 10,000 enemy airplanes at a distance of 200 miles from a defending nation’s border and will cause armies to drop dead in their tracks.”

In 1937, Tesla wrote a treatise, “The Art of Projecting Concentrated Non-dispersive Energy through the Natural Media“, where he explains how the World could attain Global Peace if every nation possessed a weapon of mass destruction. This treatise is currently held at the Nikola Tesla archive in Belgrade. The Soviet Union invested $25,000 into the idea. It was later found that other governments including the US government were also interested. 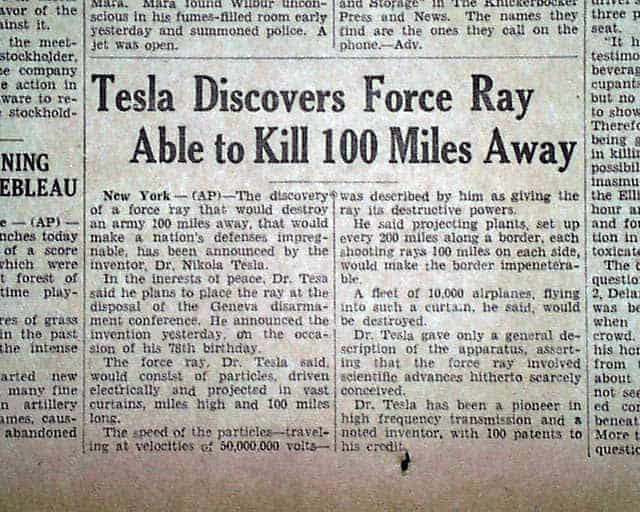 Tesla worked to bring Teleforce to fruition until the end of his life. One of the main reasons the idea never fully came to fruition was mostly due to a lack of funding.

One of Tesla’s greatest works, if not the greatest, was his work on Free Energy also called Wireless Energy. With this, Tesla could gain access to an infinite and renewable source of energy and provide it to anyone on Earth for free.

He explains: “This new power for the driving of the world’s machinery will be derived from the energy which operates from the universe, the cosmic energy, whose central source for the earth is the sun and which is everywhere present in unlimited quantities.”
Tesla believed that the Universe is not empty and is instead filled with matter called aether (aether being the potential 5th element). His intent was to condense the aether trapped between the surface of the earth and the ionosphere and turn it into an electric current. 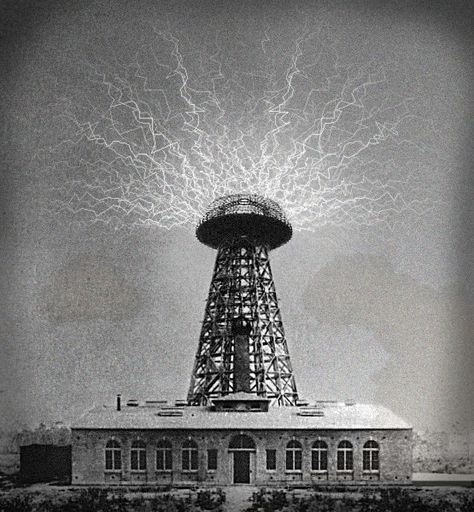 In 1901, Tesla built the famous Wanderclyffe Tower in Colorado Springs. The Wanderclyffe Tower was originally created to send the first transatlantic radio signal.
Later, Tesla decided that the tower would be used to transmit free energy around the globe.
He wirelessly lit 200 light bulbs from a distance of 40 km and created man-made lightning producing flashes of 41 metres high. The Wanderclyffe Tower was then demolished in 1917 for what were said to be “financial reasons”. Some sources claim that J.P Morgan could also be responsible this.

Free Energy had the potential to upset the global economy as it would have crashed big industries including the coal, gas or oil industries.

Tesla was found dead in his Hotel room in New York in 1953 and all his work was missing.
Some of which, including his work on free energy still remain classified.

Tesla was a polyglot and could speak 8 languages. He also had an extraordinary photographic memory and was considered a genius by his peers.

Tesla believed mathematics to be the language of the Universe. The numbers 3, 6 and 9 were of vast importance to him as he believed them to be a key to unlocking the Secrets of the Universe. In Sacred Geometry, Number 3 represents the Tripod of Life, Number 6 represents the Duality and Number 9 is the Seed of Life. Randy Powell, student of scientist Marko Rodin, says that these numbers and what they represent could potentially be the secret key to free energy.

Tesla became so obsessed with these numbers that he started doing everything in sets of three. He would walk around a building three times before entering it or would sleep in hotel rooms only with a number divisible by 3.

“If only you knew the magnificence of the 3, 6 and 9, then you would have a key to the Universe” -Nikola Tesla.