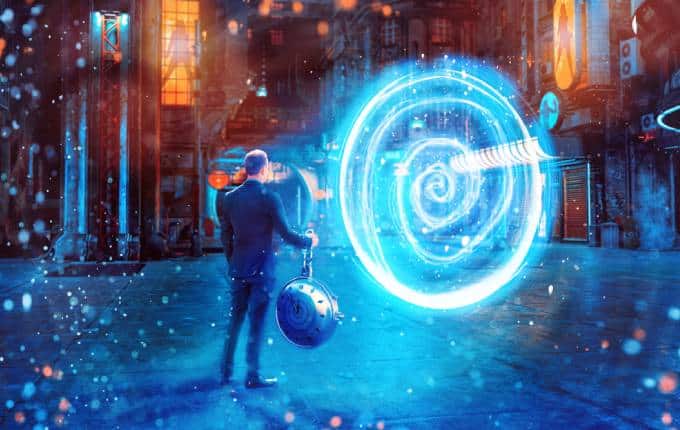 Our life is governed by the flow of Time. For nothing would take place in our physical world without its continuous flow, from past to future.

Our everyday vocabulary is very much influenced by Time through the frequent use of temporal terms such as right now, yesterday, a minute ago, in two years, all  referring to events on a specific point in the timeline.

But what if I told you that on a Universal level, none of this meant anything?

What we consider to be happening right now will be different for somebody located elsewhere in space. This is also called Relativity of Simultaneity and is based on the General Theory of Relativity  published by Einstein in 1915. According to Einstein, the more massive an object, the more it will distort space-time around it causing time dilation. Hence why clocks would run slower on Jupiter than on Mercury because Jupiter is much more massive than Mercury is.

It is also interesting to note that clocks would run faster at the top of a mountain than at sea level, because of the centre of the Earth distorting space-time around it. Although the difference would be too small to notice in this particular case.

This means that Now cannot be defined in only one way. Simply because there are too many factors influencing the flow of Time.

Now, the Special Theory of Relativity published by Einstein in 1905 tells us that the closer you get to the speed of light, the slower time goes by, as light itself does not experience time!

We can conclude that your “Now” will be  a different “Now” for somebody located elsewhere in space.

In my immersive course, Time Immersion available here, we take example on somebody being hypothetically located near the star Sirius in Canis Major. We would never be able to tell what they were doing at this precise moment by observing or communicating with them, simply because any information we would get access to would be from their past, as it takes approximately 9 years for light to travel from Sirius to Earth.

Their now would also be different than ours as we would have to take into account the speed at which the spaceship or planet they are on is travelling through space as well as the distortion of space-time around them, due to the mass of Sirius for example.

So there is no one right time then. There might be an infinite amount of it!

Retrocausality shows us that our actions in the present could influence the past. At least, in the quantum world.

This was shown through the Wheeler’s delayed choice experiments proposed by physicist John Wheeler.

The well known double slit experiment, originally proposed by Thomas Young, shows us that particles such as photons act as both a wave and a particle until observed or monitored by a third party as the act of observing them causes their wave function to collapse and as a result, to obey the rules of classical mechanics instead of quantum mechanics.

In other words, they would start behaving like normal particles.

John Wheeler proposed that the choice to observe or monitor the particle using a detector should not be made prior to the particle being emitted and sent towards the double slit, but after, in order to test the observer’s influence over the particle. It was found that the particle always chose the path consistent to the delayed choice. As if it somehow communicated with its past version.

And this, could explain quantum entanglement (see quantum entanglement explained for more). The act of observing a particle, causing it to pick a side to spin and triggering the same action instantly for its partner particle even despite being light years apart from each other, could be due to the particle, sending information from the present to the time the two particles were closed together in the past.

Time paradoxes are often the subject of time travel movies and literature, as the contradiction or inconsistency that they describe in often mind bending.

Time paradoxes can be categorized in two groups:

– Closed Causal Loops: which is when travelling back to the past in order to complete a specific action, ensures its fulfillment or creation. Paradoxes such as the Bootstrap Paradox can be found in this category. This would involve travelling back to the past and give the papers containing the special theory of relativity to Einstein before he wrote and published it. Who should be considered the author of the theory? The time traveller or Einstein? How can be trace back the point of origin (if there is one)?

– Consistency Paradoxes: which is when travelling back to the past, prevents an action from being fulfilled or created. Here belongs the infamous Grandfather Paradox: if a time traveller were to travel back to the past and kill his/her grandfather before he had the chance to have children, the time traveller should stop existing as there is no way for him/her to exist.

Another example would include the Polchinski Paradox proposed by physicist Joseph Polchinski: sending a billiard ball through a wormhole in order for it to collapse with its past version, making it deflect, would mean the billiard ball would never enter the wormhole in the first place.

The Nokimov Self Consitency Principle asserts that a time traveller must be constrained to always create a consistent version of history without any paradoxes. As this would violate many laws of physics.

So what would be the solution to these paradoxes?

Come explore this with us in our new course Time Immersion! A course that uses a whole new approach to immersive learning! By mixing education with entertainment through many videos designed with a video game software. You will learn about The True Nature of Time, The Science of Time Travel and the Secrets of Time Perception all whilst having an unforgettable experience!